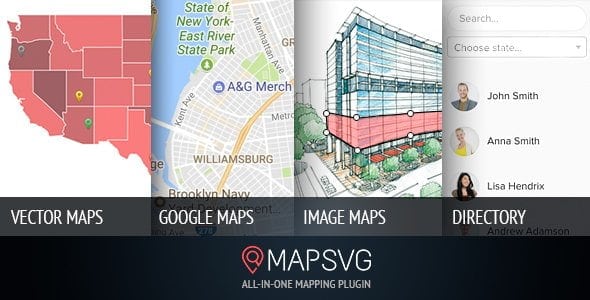 MapSVG is the last WordPress map plugin you’ll ever need – all 3 kinds of maps in one plugin: Custom Interactive Vector...
Rated 5.00 out of 5 based on 1 customer rating
(1 customer review)
Developer: RomanCode
Version: 6.0.9
Updated: 6 September 2021
Status: Original
Preview
Please purchase a subscription to download this item.
2 users like this.

Interactive maps of USA, Germany, France, Spain, Netherlands and 100+ more countries are included. Use them on their own or make them semi-transparent and overlay on Google Maps.

Turn any vector image into an interactive map

Turn any vector into an interactive map. Take any of the included SVG maps and edit them in Adobe Illustrator or InkScape (add new regions, titles etc.) or draw your own map, floorplan, or any other image and make it interactive with MapSVG.

MapSVG has drawing tools which allow you to add clickable vector shapes to JPEG/PNG images. For example it could be an image of a building with clickable floors of the building showing a detailed floorplan on click.

Use Google Maps on their own or extends the functionality: overlay one of included vector maps or any other vector artwork on Google map. Choose Google Maps styles: silver / night / retro, etc. or create a custom style.

Create custom objects and show them on a map. Objects can have many custom fields: text, image, select, radio, checkbox, wp_post, date. Show objects on a map as markers or show a list of objects in a pop-up on click on a region of a map.

Show a list of custom objects in a directory with search and filters.

Add markers to a map simply by entering an address. 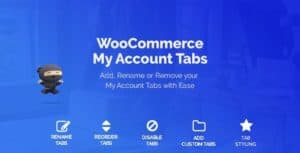 Notes: Items which are labeled Activated/Pre-activated don’t need below instruction. This only applies for items that are original AND need modifications to work.